Skip to content
This night’s supper club was held in a cafe, found inside a church in South West London. The vibe was very laid back with lots of time to mix and mingle with your fellow diners.

On arrival, I was given a lovely welcome cocktail and had a seat at one of the two long tables. A few pre-dinner snacks were put out on the table which was a nice touch for a hungry group of people who probably arrived straight from work like myself. They were a mix of sweet and savoury fried plantain which was nice. Besides these, there was a very reasonably priced bar to by beers, wines, prosecco and juices from. 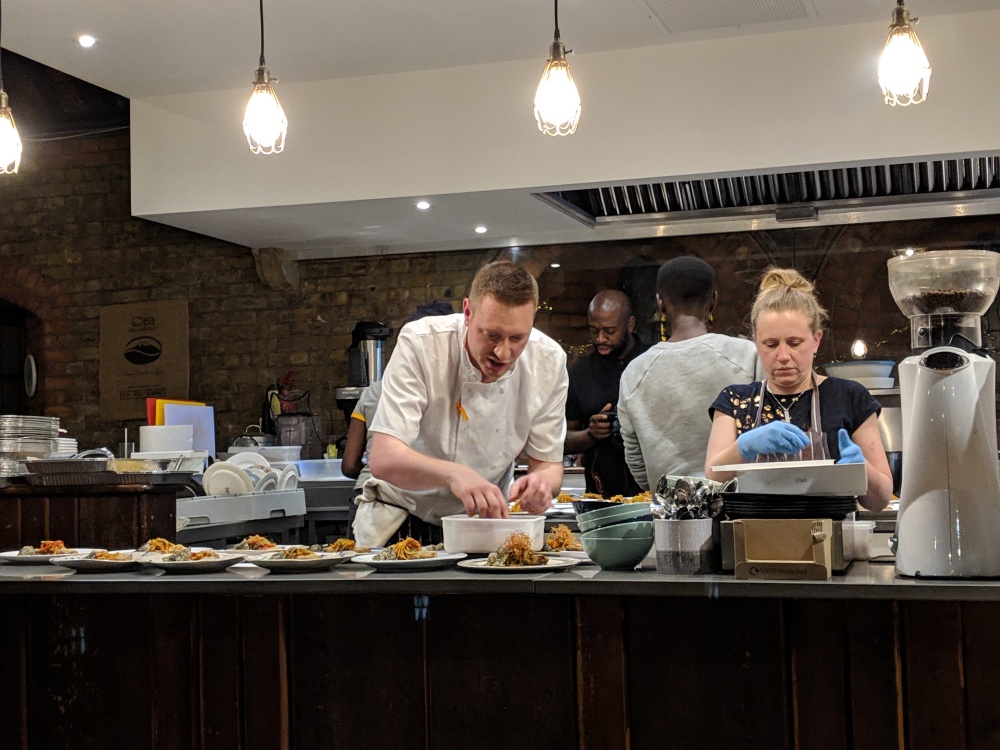 The food on menu was all vegetable based and included no meat products at all. This always offers up a challenge for a chef and diners as there are no eggs, milk or even less obvious ingredients such as gelatin. I find that these vegan meals can go one of two ways. One is that the meal becomes very heavy and unhealthy with lots of fried foods, blended nuts and saturated fats. Much of this can come from the former ‘healthy’ food: coconut oil. The other way vegan meals can go, is by being just great food that doesn’t try to be meats and cheeses, and is just a selection of very tasty dishes on their own. Thankfully, tonight’s meal fell mostly in the latter, with a selection of fresh veggies, rice, pasta and sauces.

To start things off, we received a nice mix of sauteed veggies, legumes and croutons. These were tasty with some flavourful sauces drizzled on top. After this we had deep fried courgette which was not greasy and perfectly salted.

Between these and the main came the most creative thing I have ever seen and caused all of us to question reality. Was this a slice of orange or was it all just a piece of jelly? Turns out it was something in between as a deliciously flavoured jelly held within a real orange peel and dusted with sherbet. 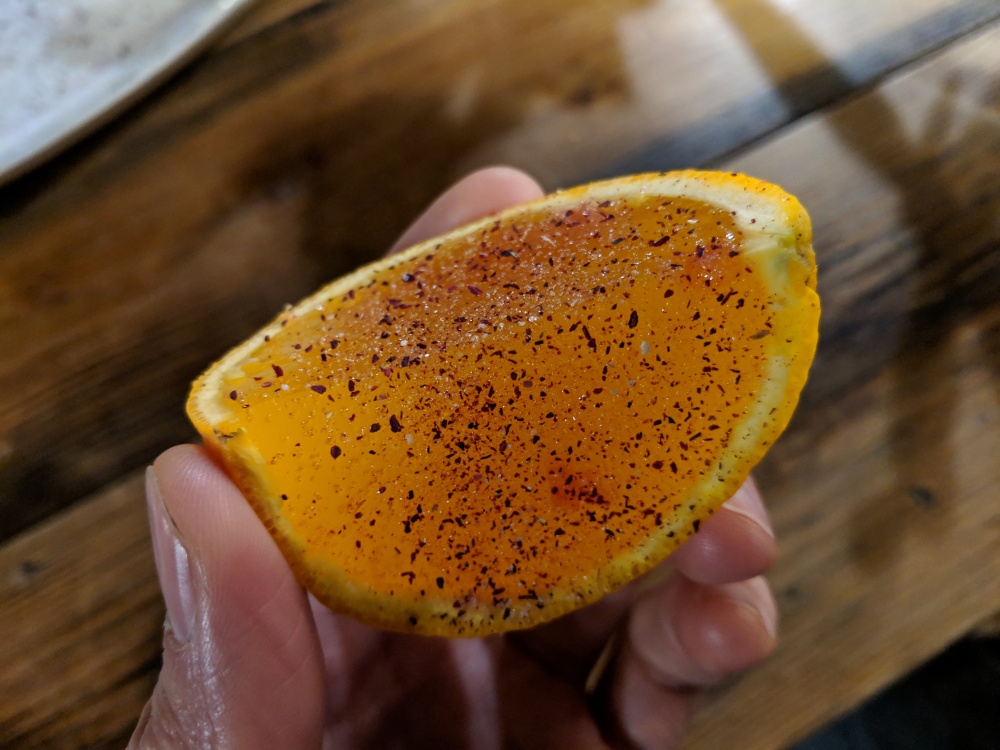 The main was a mix of Caribbean favourites done in a vegetable-only version. Starting with my favourite, we had a the veggie patty which was delicious and fresh. The pastry was tender and soft but held together without falling apart, and wasn’t the least of bit oily. Along with this was a roasted mini corn and a piece of okra, both of which were nice and crispy. The main attraction on the plate was a block of jerked tofu. This was my least favourite item on my plate and just made we want some jerk chicken. I find that tofu is all the calories and none of the flavour of meat. Not to say it wasn’t flavoured nicely, but compared to everything else on my plate, I would trade it in for another patty or maybe a fake chicken substitute made from jack fruit. The flavours were spot on though as was the sauce it was topped with.

If that wasn’t enough food, we also got some shared sides to go along with them. There was rice and peas (perfect), macaroni and cheese balls (delicious) and coleslaw (fresh and crunchy). I went back for second of each of these, they were all just as tasty as everything else served during the evening. 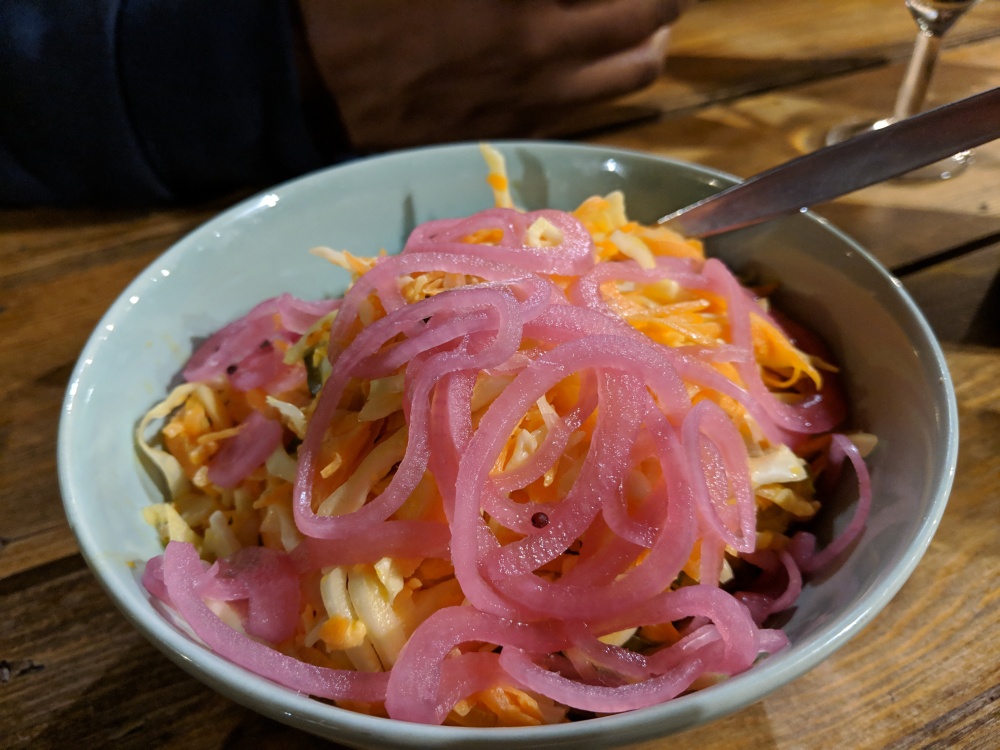 Can’t say I was still hungry when dessert came out, but nothing was going to stop me from eating all of this beauty. I saw it being plated up like a piece of art, and I was so curious to what it could be.
What it was was a total flavour explosion.
There was a chocolate and avocado pudding on the base with a cake in the centre, topped with fake ice cream made from banana and topped with dried bananas. sprinkled around all this were toasted nuts. The flavours went together so well with the cold ‘cream’, melting in the cake, and the chocolate custard base. Dishes like this stand out on their own, and don’t make you feel like you are missing out on real creams and milks. On their own though, the cake was dry, the ice cream a bit bland, and the sauce was like an avocado shake. All together though they were perfection and a great way to end the evening. Asher clearly has a great handle on flavours and textures.

I was looking forward to this meal as meat eater.I do think that we need to eat far less meat for environmental purposes and that it’s also good for our health. Vegan meals have become very trendy recently which has brought about exciting creativity with ingredients and flavours. I love trying out different foods and I think that Asher’s supper club did things right by making great dishes, and not focusing on trying to fake meats. Besides the tofu, I would gladly order any of these without even thinking about them being vegan or not, and I think that’s the way things should be. I’m excited to see what else Asher comes up with next with his great sense of flavours, creativity with ingredients and passion for making beautiful food. Thank you to Asher’s Supper club for the dinner and LovePopUpsLondon for the invite.
You can contact Asher here to find out about the next big dinner: ashersupperclub@gmail.com